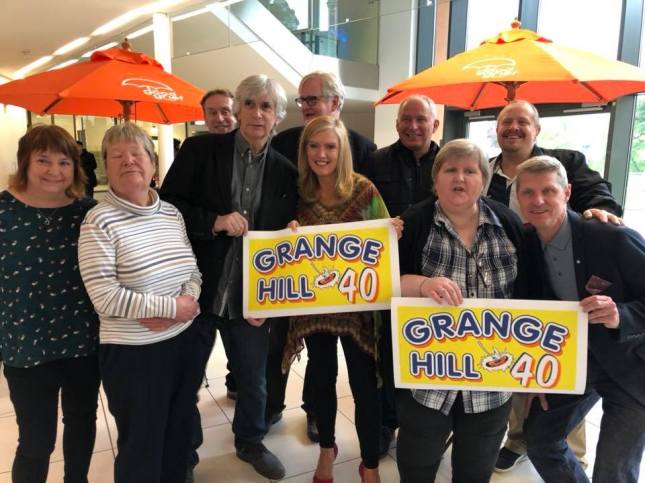 Taking place at the amazing Royal Holloway campus in Egham, Surrey, the event had been months in preparation and , as well as celebrating an anniversary, it was all in aid of a good cause; former Grange Hill pupil, Linda Magistris’ charity; The Good Grief Trust.

The event began at 10am with an introduction from the hosts and Master of Ceremonies, Tony Currie. This was followed by a talk from Linda, explaining the work of the Good Grief Trust, and how it originated after the death of her partner, former Grange Hill director, Graham Theakston.

First guest, Anna Home (the former Head of Children’s Television at the BBC, and the show’s original Executive Producer) was interviewed by Tony Currie and revealed how the show began, and how she had to fight to keep the show on the air. A true pioneer, Anna also discussed the way Grange Hill changed the landscape of children’s television.

Following a stop for autographs, photos and a shoot by a Daily Mirror photographer, the guests reassembled for the second panel of the day; hosted by Grange Hill Gold! Mark Baxter (Duane Orpington), George Armstrong (Alan Humphries) and Linda Magistris (Susi McMahon) were faced with a long list of questions from yours truly, but were very generous interviewees, sharing stories of their auditions, their first day on set, judo training and sneaking around TV Centre, as well as many other memories of their time at Grange Hill.

A late addition to the day was musician Alan Hawkshaw who composed ‘Chicken Man’, the show’s original theme. In an informative interview, Alan talked about the origins of the track as well as his other compositions; including the theme for Countdown.

Next up, in the longest interview of the day, was Phil Redmond; creator of Grange Hill, Brookside and Hollyoaks. Interviewed by his former colleague, Chair of The Writer’s Union, and friend, Gail Renard. During an informative and friendly chat, Phil talked about his original vision for Grange Hill, how it developed and the criticism the show faced. He also talked about how he insisted he kept the rights to the programme and his role in later series. Phil then talked in detail about Brookside and how his original career as a quantity surveyor had lead to him persuading Channel 4 he needed to buy the whole of Brookside Close. The interview ended with Gail showing Phil a gift he’d given her many years earlier; a photo of him with awards he had won over her. Gail was able to finally return the favour by presenting Phil with a photo of her holding her BAFTA!

A short lunch break was followed by a screening of a Blue Peter report about the filming of the 1981 Christmas Special, whilst a screening of the Just Say No video preceded the next panel interview.

A charity auction raised over £300 with an amazing Grange Hill cake (complete with sausage on fork) donated by Mark Baxter, being the biggest earner. This delicious cake was later shared with all attendees during a tea break!

It was time for teachers next as Gwyneth Powell (Mrs McCluskey) and Lucinda Curtis (Mrs Reagan) talked with Chris Perry about their acting careers and how important Grange Hill had been to them, as well as how acting conditions on television had changed.

Although short on time, a final panel of academics sought to discuss the legacy of Grange Hill. Maire Messenger Davies, Rachel Moseley and Helen Wheatley discussed the impact of Grange Hill on both themselves, television and popular culture, before opening the floor to the audience’s own recollections. An all too short panel summarised just how important Grange Hill had been.

As a finale, it was down to Linda Magistris to thank everyone for coming and to unveil two special video messages from the original stars of Grange Hill ; Todd Carty (Tucker Jenkins) and Michelle Herbert (Trisha Yates). Both stars wished Grange Hill a very happy 40th birthday and apologised for not being able to attend, however, both promised to attend the special events taking part in September (See https://www.eventbrite.co.uk/e/official-grange-hill-40th-anniversary-charity-fan-event-tickets-46678908873 for tickets and details).

Not only did the event raise funds for a great cause, but it gave fans and cast the opportunity to celebrate Grange Hill’s 40th anniversary properly. A friendly, relaxed event in wonderful surroundings, the event proved to be a great way to mark 40 years!

If you missed this event, you may be interested in attending another very special event taking place in September 2018, which brings together cast from every era of Grange Hill. Click here for tickets.