So, after a 5am start, we headed towards Fulham, for the second Grange Hill Memories event. Who knew waking up for school could be so tough?!

Arriving at Baron’s Court tube station, we followed the directions towards Fulham Prepatory School; the location for this event. As we turned the corner onto Greyhound Road, there was no mistaking this building; it was ‘Grange Hill’ itself between 1981-1985! It was here that Zammo, Roland and Fay started school, and it was here that Gripper Stebson ruled the dark corners of the playground, whilst Mrs McCluskey ruled the rest!

Once inside the school, we followed signs directing us to registration- just like the first episode of so many series! Hoping that no one has switched the direction of the arrows, as is almost traditional in Grange Hill, we eventually found our way to the third floor and the school hall itself, where, just like a traditional assembly we awaited the organisers at the front of the stage. 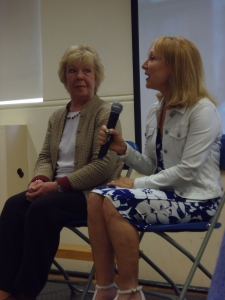 After some fantastically edited video clips, we welcomed the guests of the first panel (entitled Inside The Staffroom) to the stage. Headed by an emotional Gwyneth Powell (Mrs McCluskey) were NicholasDonnelley (Mr Mackenzie), Karen Lewis (Miss Partridge) and William Brand ( Mr Van De Groot).

Their 30 minute group interview saw the revelations that Mr Mackenzie was not actually Scottish, that Karen Lewis spent her last series trying to hide unsuccessfully her real life pregnancy and that Gwyneth Powell’s favourite episode was the one with Roland and the stink bombs. She also revealed her concerns about Mark Savage being mistaken in real life for vicious Gripper, despite being the exact opposite to his character.

An autograph and photo session followed with the queue for Gwyneth Powell being the longest.

Next up was a tour of the school itself, lead by Erkan Mustafa (Roland Browning), in which he highlighted key filming locations and the scenes of several classic GH moments. 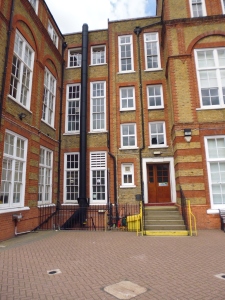 A lunch break allowed guests to eat their lunch in the Grange Hill playground; something this writer never thought he would experience!

As the full quota of guests arrived, attendees were able to have a group photo on the steps of the school with the ex-pupils and teachers; another once in a lifetime opportunity. The scary part is that some of the cast have barely aged! For us, despite costing extra, was one of the highlights; I’ve come away with a fantastic photo of myself and the cast on the school steps!

Bumping into Paula Ann Bland (Claire Scott) on the stairs, she told us how strange it was coming back to the school itself; stranger than seeing her cast mates again. This was something Erkan echoed.

The second panel ‘The Boys Of Grange Hill’ was rechristened ‘The Lads Of…..’ And it was easy to see 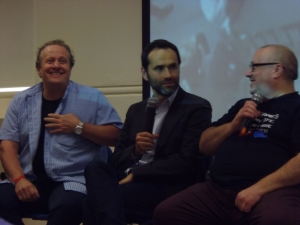 why. Consisting of George Armstrong (Alan Humphries), Vincent Matthews, Rene Zagger (Mike Bentley) and Ian Congdon-Lee (Ted Fisk), the panel was full of banter and joking between the ex Italia Conti students. What became very clear was that, despite spanning several different eras of the show, the panel knew each other and got on well; sharing the unique bon

d of growing up on Grange Hill. Rene Zagger revealed he was not at all good at running, whilst Vincent Matthews recalled attempts to kill him whilst filming Jeremy’s drowning sequence. George Armstrong said that despite not having seen each other much, he still classed Todd Carty as a mate, and that Todd had sent a very funny video for his 50th birthday. Ian Congdon-Lee proved to have a really sharp sense of humour, discussing his lack of height when pretending to be an American Footballer.

After an autograph session with all the afternoon guests, Erkan took his second location tour of the day. Starting outside the gates, he took attendees

on a personal reminiscence of scenes he’d filmed. Next a visit to the main school corridor took in a look at the cloakroom where Gripper first menaced Roland and the place where the school tuck shop used to be. Erkan also confessed that his character was only referred to as Ro-Land by Janet after a typing error added a hyphen to the script. As reiterated by our tour guide, the opportunity to tour the school with a cast member, was yet another unique experience provided by the organisers. 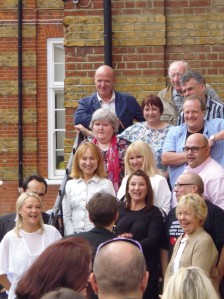 The final interview panel, ‘The Greyhound Road Years’, saw Lisa East (Christine Everson), Alison Bettles (Fay Lucas), Lisa York (Julie Marchant), Joann Boakes (Anita Unsworth), Paula Ann Bland (Claire Scott) and Erkan Mustafa unite to reminisce about filming at the school. Whilst some of them had been stage school pupils, others such as Lisa East, Erkan, Alison and Joann discussed the challenges of attending a normal school and being in Grange Hill, with the latter also remembering how their mums had been chaperones for the cast, which meant they got told off more than anyone else. Paula, Aliso

n and Lisa York remembered many nights out in the West End where they were given platinum cards to clubs like Stringfellows. Whilst none of this panel continue to act, they all clearly looked back fondly on their time at Grange Hill; in some cases it was the nostalgia of their teenage years together, whilst for others it was the unique bond the cast had and the realisation that Grange Hill had impacted not only on their own lives but those of the viewers too.

The day ended with an emotional tribute video to cast members who were no longer alive, including Lucinda Gane, Michael Sheard and more recently Mark Farmer, Michael Percival and the much missed Terry Sue Patt.

Grange Hill Memories proved that there is definitely a market for this kind of event. Well-run, meticulously planned and with an enjoyably leisurely pace, the day was a very definite success. The cast members could not have been more friendly, despite many of them being slightly overwhelmed by the level of interest.

If you were a Grange Hill fan whose name wasn’t marked as ‘Present’ in the register for this event, you really missed out.

Please visit the official photographer, Deryck Obray’s website and facebook gallery for more photos of the event. You can also watch his video of Erkan’s tour of Grange Hill here.

Below are some of our own exclusive photos.